Young caregivers are used to social isolation. Covid-19 is bringing added stress as it threatens resources they depend upon. - Caring Across Generations 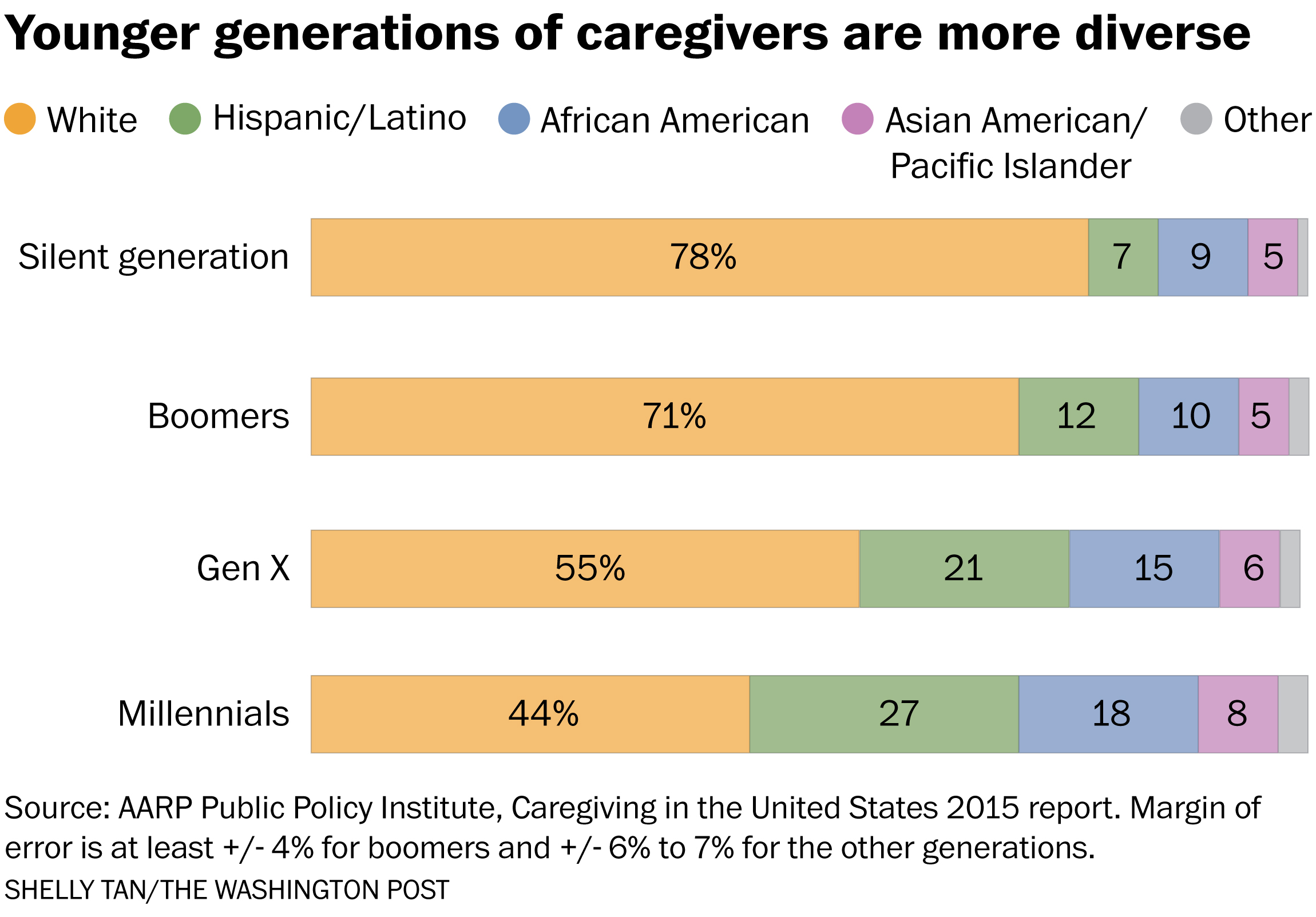 Young caregivers are used to social isolation. Covid-19 is bringing added stress as it threatens resources they depend upon.

This article first appeared in The Washington Post on April 7, 2020. Read the original there.

Shelby Small was on track to finish college debt-free, travel, start a career in fashion and look for a life partner. Then, her father fell gravely ill.

The following year, at age 23, Small put aside her studies and left her full-time job to help her mother care for her father, who has chronic obstructive pulmonary disease, in their Laurel, Md., home.

Small’s life telescoped inward. While her friends were living the college life and preparing for careers, she was focusing on monitoring her father’s BiPAP machine (a device that helps him breathe) and changing his cannula (plastic tubing that delivers oxygen) in the daily struggle to keep him alive.

Taking care of an ill or disabled family member at any age is taxing, psychologically, physically and financially. But caregivers in their 20s and 30s face additional challenges. Their careers are less likely to be established than those of middle-aged people. Among millennials who have jobs outside the home, one-third earn less than $30,000 per year. They are less likely than those in older groups to be married or to have reached other milestones of adulthood.

Their lives are challenging, at best. The arrival of a virus that has a high fatality rate for people over 60 with underlying health conditions has made it even more so.

When the coronavirus struck, Small said, she and her mother “had to talk to my dad’s in-home hospice workers about what precautions are in place to keep everyone healthy, since they see so many patients every day.”

She knows social distancing and extreme hygiene may seem excessive to some, but when dealing with someone with a compromised immune system, it’s necessary to keep them healthy. “I have literally practiced these things for the past five-plus years,” she said.

And, unlike older caregivers, they have few peers who can relate.

Small’s life as a caregiver has been extremely isolating. “When you try to talk to your friends about it, it’s kind of awkward, because you’re dealing with [a] parent transitioning into death. . . . Most people my age aren’t necessarily dealing with that, and so people kind of get very quiet, or they basically just stop talking to you because they don’t know how to relate to you.”

She says she feels empathy for young people who are now getting a crash course in the disconnection she has experienced. Some have had to return home, away from their peers, their careers and the lives they had planned.

Small had other plans, too. She had worked as an administrative assistant, but she often needed time away to care for her father. She believes her age made it harder for her employer to understand when she needed time off.

“It was almost as if I was taking care of a relative with the flu instead of [being] someone who had a parent who was in the process of dying,” she said. “I would be in the middle of an appointment with his nurse, or I would be giving him his medication [when] they would literally email me . . . about things that I didn’t think were really important, like address changes or ‘What do you think of this layout for the website?’ It was never ‘How are you?’ or ‘I hope things are going well,’ which was hurtful, because I’d worked there since I was 19.”

She never returned to her job.

The pressure on younger caregivers is evidence that the old paradigms don’t work anymore, said Josephine Kalipeni, director of policy at Caring Across Generations, an organization advocating for greater government support.

“The caregiving situation that we’re facing today was built on the presumption of a full-time, stay-at-home caregiver,” she said. But millennials “are having to cut back on work hours, drain their savings, move and give up promotions, all because you have to caregive.”

Jennifer Levin, 39, started a Facebook group called Caregiver Collective after she began caring for her father in her early 30s.

More than 500 members from around the world, most under 40, have joined the three-year-old group in search of community and practical advice.

“A lot of people have really never admitted what they go through out loud,” Levin said.

Since the onset of the coronavirus, Levin said, a record number of members are attending the group’s online video chat, looking to connect. Quarantine and self-isolation have placed some at home 24 hours a day with the person they care for.

“There is no delineation of a private life at all, which was hard enough to balance before,” she said. “Others are trying to care for someone who does not live with them and figuring out how to manage caregiving without getting physically close to that person.”

Still, members of the Facebook group, which Small belongs to, seem to have a more positive attitude than other caregivers, Levin said.

“In other support groups, in person or online, when it’s a lot of older people, there’s a lot of bitching that goes on, and I’ve noticed in this group there’s no negativity,” she said. “There’s a feeling that this is hard, but there’s no ‘My life sucks.’ . . . I wonder if it’s a generational difference in how we process adversity.”

Monica Moreno, senior director of care and support for the Alzheimer’s Association, said this response is consistent with some of the character traits often used to define this generation. “They’re socially conscious — they support causes they’re passionate about. Caregiving can be viewed as a cause,” she said in an email. “They are interested in making a difference. They value work-life balance — this is a really important concept to embrace if you are going to have a good attitude about caregiving. They are compassionate.”

Levin agreed, noting that another defining characteristic of millennials is their tendency to be closer with their parents than previous generations. “We have a different relationship with our parents than older generations do, and I think there’s a closeness where we feel more likely to step forward and say, ‘I’ll take care of my parents.’ We’re not someone who left the house and said, ‘See ya, I’m going to have my own life.’ ”

‘I’m hoping that this exposes the flaws’

Aisha Adkins of Dunwoody, Ga., never had the chance to move out of her parents’ home. At 27, she had graduated from college and was looking into jobs and graduate schools when her 57-year-old mother was diagnosed with frontotemporal dementia. A paid caregiver was too expensive, and her mother was too young for Medicare. Because of her father’s income, the family didn’t qualify for Medicaid. His job came with health benefits, so Adkins stepped in.

“I thought I was going to live the life, but yeah, things changed quickly,” said Adkins, who is now 35 and has been caring for her mother for eight years. She cooks, cleans, does laundry, manages medication, schedules doctor’s appointments, and helps her mother bathe, eat, dress and get in and out of bed. “Even when I’m away from the house, I’m calling in to give medication reminders.”

On paper, she knows she might look like a slacker. “There’s kind of a running joke about millennials living with their parents until they’re 45,” she said. “It stings a little bit, because there’s an assumption of laziness and lack of ambition associated with that.”

Adkins doesn’t know how long her role as a caregiver will continue or if she’ll have to pick it up again with her father. And if it does end, she doesn’t know how she will forge an independent life.

Adkins is unfazed by the quarantine mentality now gripping the nation. “I’m used to freaking out every time someone coughs or sneezes, so it’s nothing new for me. What’s interesting for me is to see the rest of the world morph into a similar mind-set.”

She worries the pandemic will strain resources such as Medicaid and Social Security disability in the short term, but hopes it will eventually improve the lives of families like hers.

“When people are exposed to food scarcity and sickness that we’ve never been exposed to before, it changes voters’ minds, and it can change policymakers’ minds,” she said. “We need paid medical leave and family leave. We need a better long-term support system and better long-term care. I’m hoping that this exposes the flaws that exist and we’re able to make rapid changes in order to protect the most vulnerable population.”

Despite the challenges, millennial caregivers say the experience is not all bad. Jeffery Kearney, 36, started taking care of his mother as a teenager in Pine Bluff, Ark., and picked a university close to them so he could race home when needed. Now a District resident, he still helps by coordinating doctor’s appointments and speaking to hospital representatives.

Because of the role that Kearney took on in his mother’s care, he said, “my mom and dad and I and brother are abnormally close. I imagine that having to take on those responsibilities added to the connectivity that we all shared. . . . I feel like I know them in a way many people don’t know their parents. I feel like I understand them, have a clarity that many people don’t have when they’re young.”

Natasha Small, Shelby’s mother, said her daughter’s help has been crucial, but she and her husband find it devastating to see her so sequestered at such a young age.

“This is horrendous work, and . . . it breaks my heart that this is the kind of harvest that she’s reaping at this particular moment in her life. But I do believe it gives her a more mature perspective on her life,” she said.

It has also given Natasha a new perspective on her daughter. “She said, ‘It’s my dad, these are his last days, I’m going to be here,’ ” Natasha said. “I was really surprised at how strong she was, because she’s still my baby . . . to just see how she’s weathered through this and how she has really and truly become more like a friend.”