How We're Celebrating Grandparents Day in Maine - Caring Across Generations 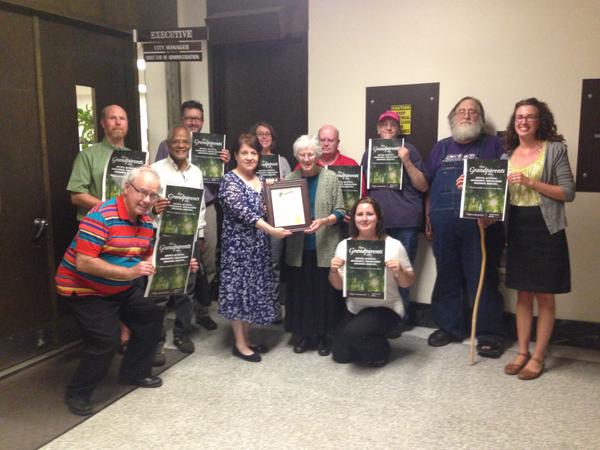 Photo caption: Members of Food and Medicine as well as the Maine People’s Alliance, after the mayor of Bangor, ME issued a Grandparents Day Proclamation on August 25, 2014

By Kevin Simowitz, Organizing Director at the Maine People’s Alliance

Some of us might be tired of the constant coverage of Maine’s aging population. It’s tough to hear a politician deliver a public address or simply listen to the news without a reminder that Maine is the oldest state in the nation, and that by 2030, one in four Mainers will be over the age of 65.

And it’s not just Maine — nationwide, someone is turning 65 every eight seconds, as part of the growing Elder Boom.

But rather than be terrified by these statistics, we can view our changing demographics as an opportunity rather than an anchor, and consider ways to harness the power of Mainers living longer into wins for aging with dignity as well as economic opportunity for tens of thousands of home care workers.

That’s why we joined Caring Across Generations, and why we’re so excited to be celebrating Grandparents Day this year. It’s not just a Hallmark holiday for us, but a time to shine a spotlight on the needs of our state’s aging population and the workers who do the important work of caring for them.

In our state, we’re working to support a proposal put forth by Maine House Speaker Mark Eves, who recently announced his “KeepME Home” plan that would help seniors and those who care for them.

Eves’ plan, if passed, would: create affordable housing for seniors in each of Maine’s 16 counties through a $65 million housing bond; boost pay for in-home care workers who have not had a raise in nearly a decade; and expand property tax credits for seniors.

These kinds of bold state innovations are exactly what we need in Maine and around the country to not only care for our growing senior population and ensure that they’re able to age with dignity and independence, but also help ensure that home care jobs — currently some of the lowest paying work in the country and the fastest growing — are good jobs.

And there’s a growing recognition that these kinds of policies are exactly what we need to build the caring economy of the 21st century.

On August 26, we hosted a tele-townhall with Speaker Eves, and were joined by almost 2,000 Mainers, several of whom shared their stories as workers and as aging Mainers.

Helen Hanson, a former home care worker, shared her story of struggling to make ends meet with low wages and no benefits, saying, “I’ve worked in home care and in a nursing facility. I’d rather work in home care, but it is hard to get enough hours a week to pay your bills.”

On Grandparents Day, in addition to helping pass local ordinances recognizing the holiday in three different towns, we’re partnering with clergy across the state to share a message about caring for senior and aging with dignity from the pulpit.

Grandparents Day is a perfect time to recognize that Maine’s aging population is an opportunity for our state. We can help Maine seniors stay in their homes at the same time we create new jobs in the caring economy that pay a living wage and recognize the skill and talents of home care workers.

We’re excited to be talking to faith congregations, local elected officials, and MPA members across the state about this holiday —and all the next steps we need to take together!