A family-wide effort - Caring Across Generations 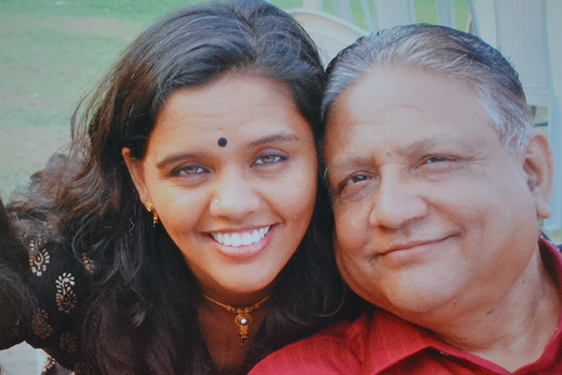 I’m Sarita, one of the co-directors of Caring Across Generations. In honor of Father’s Day, I wanted to share the story of my dad, and why this work is so personal to me.

Growing up, my dad was a doctor and pillar of the community in my hometown of Rochester, NY. He was also always a bit absentminded, so when he started forgetting things a few years after he retired, we didn’t think anything of it.

But as time went on, it became clear that something wasn’t right. My mom began telling me that he would ask the same question over and over. She explained that his doctors—who had all been my dad’s friends and coworkers—said it was normal for a retired person, who suddenly has less to worry about, to lose track of things.

Then one weekend, I was home in Rochester for an engagement party. I knew I’d see my dad’s doctor there, since he was a family friend. With all the courage I could muster, I pulled Dr. P aside, and asked him what was wrong with my dad. I didn’t want him to just tell me that everything was going to be ok. I wanted to know the truth.

At that moment, I could see in his eyes that he was torn between being my dad’s doctor, and his friend.

My heart dropped when he finally admitted that my dad had the beginning stages of Alzheimer’s.

I had to keep it together—we were at a party surrounded by smiles and clinking glasses. I drove home with my parents without saying a word. When we finally got back, I promptly called my brother and sister on the west coast, and we spent the next hour bawling together over the phone.

I later realized that the truth was just as hard on my dad’s doctor as it was on our family. Our parents were elders in the Indian community and helped build the local community center. My dad had helped Dr. P start his career, and he was having a hard time breaking the news to his mentor.

That was two years go. Since then, it’s been a family-wide effort to figure things out.

Even in my position, as a co-director of a movement focused on home care and long-term care, the process has been incredibly daunting. By the time they were my age, my parents had lived in three countries and traveled the world—without a guidebook. But they never had to navigate the challenges of Alzheimer’s and the bewildering long-term care system in our country—none of us had.

But there’s one thing I do know for certain. Having honest and open conversations are exactly what we need to bring aging out of the shadows. We can’t all continue to bear these burdens alone.

In my own family, we started to convene family meetings where my brother, sister and I talk to my mom and dad about the kind of care they want. It’s not easy, but talking about it has made it easier.

And while we may not have a guidebook, we’re working toward filling our own storybook.

The most heartbreaking thing for me is that my four-year-old daughter will never know my dad the way I do. She’ll never know his passion for ideas and his amazing stories.

But my dad still remembers his youth, and I’ll catch my daughter sitting in his lap, listening intently to him tell stories about growing up in India. Meanwhile we’ve been trying to document those moments the best we can, so that even if he’s not around to tell his stories, future generations of my family will know what an inspiration my dad was.

We’re all in this together, but we can’t find a way forward if we keep it to ourselves. A first step is sharing our own care stories, and I’d love to hear yours.

If you’re interested, please send me an email at info@caringacross.org to tell me a story about your dad, or any loved one whose care story you’d like to share.