Culture Change Dispatch: Care Is Everywhere — How Humor Helps Illuminate The World Around Us  - Caring Across Generations 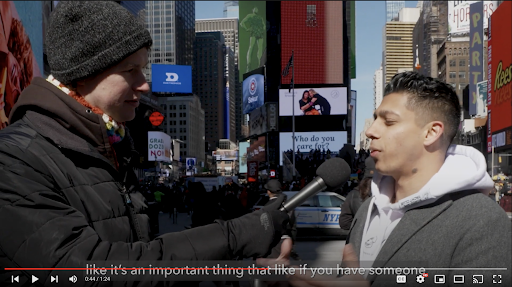 Culture Change Dispatch: Care Is Everywhere — How Humor Helps Illuminate The World Around Us

On February 18th, National Caregivers Day, we launched a larger-than-life ad campaign throughout DC and in Times Square that shed light on real care teams and their stories, and asked the millions of people who saw these ads big questions about care.

Putting up giant digital billboards in the middle of Times Square is cool enough on its own. But we wanted to know what people actually thought about seeing these beautiful portraits of care – something that’s rarely made visible – on such a large and public scale. So we partnered with Brooklyn-based writer and comedian Zach Zimmerman to hit the streets of New York City and ask a bunch of strangers what care means to them.

We borrowed from the traditional “man-on-the-street” style comedy videos to catch people walking by the big-screen ads (seen in the background of the photo above) to engage with the questions posed on them:

We knew having a comedian like Zach flagging people down and connecting with them through humor would help break down walls around talking to a complete stranger on the street, especially about a topic that most people don’t think about outside of their private home life, let alone on a 100 foot digital billboard next to fashion and consumer ads in one of the most famous places on earth. Yet we were still pleasantly surprised by the number of people who actually wanted to stop and talk to Zach, and how much they really did connect the billboards to care in their own lives and as a larger issue.

Whether it’s care, climate change, reproductive rights, racial justice, or any other challenging systemic issue we’re trying to solve, comedy is a powerful tool for engaging people.  It’s an art form that opens up new avenues of thinking, of processing, of understanding. It opens the door to talking about difficult or uncomfortable things. In times of crisis, comedy points out the absurdity of injustice and bigotry and makes hard truths easier to hear, while also serving as a form of catharsis. The power of comedy to disarm, to soften the walls we build around our strongly-held beliefs, and to build connection with others across differences of opinion, identity, and experience is tremendous.

These videos are just a drop in the vast ocean of possibilities when it comes to employing comedy and humor to shape narratives, shift culture, and transform society. They’re funny, they’re touching, and they give us a glimpse into how real people want to be cared for and care for those they love. You can watch them all here. And stay tuned for more care comedy from the culture change team at Caring Across!

Sarah Vitti is our Senior Culture Change Manager, leading our culture change strategy around creating art and innovative storytelling campaigns to change the way our society relates to and values caregiving. You can get to know Sarah a bit more here.