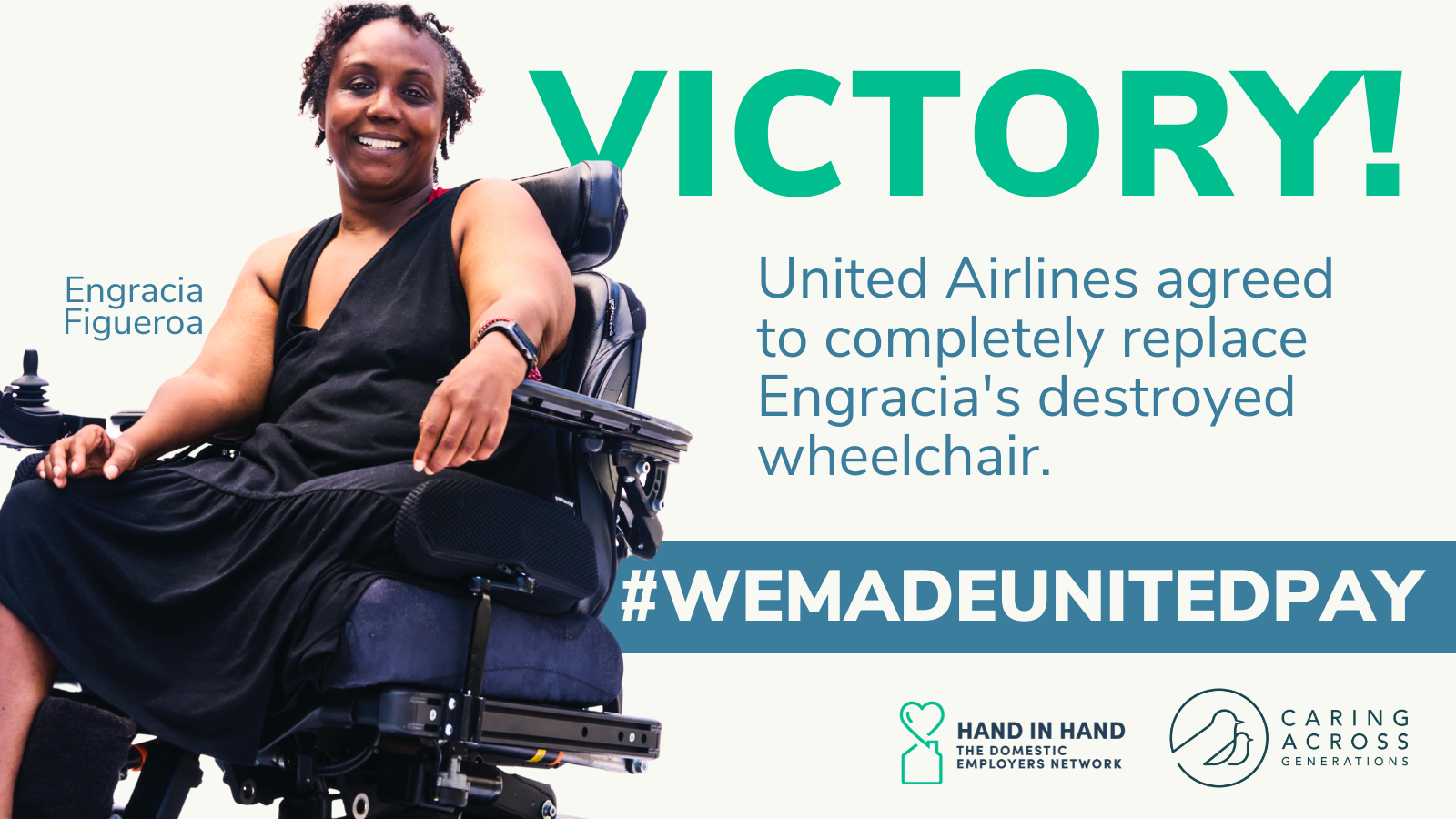 By: Caring Across Generations and Hand in Hand: The Domestic Employers Network

Update 2: We regret to share that on October 31st, Engracia Figueroa passed away as a result of the injuries she sustained when United Airlines destroyed her wheelchair.

Hand in Hand, The Domestic Employers Network, of which Engracia was an active member shared, “All of us at Hand in Hand are heartbroken, shocked and enraged by Engracia’s needless death. This loss should never have happened. While we are reeling from the layers of injustice this tragedy makes visible, we are holding Engracia’s tenacity and resolve as our guidepost. Lives are at stake in the work that we do, and our current ableist and racist system continues to fail our communities time and time again. We cannot and will not stand by and let these systems of oppression prevail.” You can read Hand in Hand’s full statement here.

Through our collective efforts our story was picked up by ABC news, the petition to demand United replace Engracia’s chair gained thousands of signatures, and we flooded United CEO Scott Kirby’s inbox with emails. Engracia even met with Senator Tammy Duckworth’s office who provided additional support.

Says Engracia, “It has been a difficult time. But one bright spot has been the incredible outpouring of support I received from the Hand in Hand community, Caring Across Generations, the National Domestic Workers Alliance, and other allied organizations and individuals. Thank you to everyone who spoke out during this campaign.”

But too often, this same right isn’t afforded to people with disabilities. For Engracia Figueroa, a disability rights activist and president of Communities Actively Living Independent and Free in downtown Los Angeles, a flight on United Airlines from Washington, DC to Los Angeles this week resulted in the destruction of her $30,000 custom wheelchair. Losing a wheelchair isn’t like losing a piece of luggage – it’s like losing your independence.

“It was like my worst nightmare came true. My wheelchair is custom made for me and my spinal cord injury. It’s a $30,000 machine that is not easy to replace, and without it I am now stuck at home,” Engracia said. “This has been the most horrific experience of my 51 years living.”

Ironically, Engracia was returning on the flight from the #CareIsEssential rally and Day of Action in Washington D.C., where she and Christine Laing, known as June, a homecare worker who provides personal care for Engracia, both spoke about the need for more investment in homecare for disabled people and older adults. Both Engracia and June are active members of Hand in Hand: The Domestic Employers Network, which brings together home care consumers and workers to fight for better care systems.

Engracia and June were also both featured in the Communities of Care art installation, created by artist Paola Mendoza, in Freedom Plaza this week. In a recording, they spoke about their unique bond and how the care that June provides allows Engracia to stay independent. “Caregiving…allowed me to maintain the level of independence that I thought I lost acquiring a disability,” said Engracia in the exhibit.

Upon landing back in Los Angeles on Wednesday, Engracia’s chair was returned to her bent backwards and completely broken. She was unable to sit in it, and it would not start. To add insult to injury, she spent over four hours in the airport, filing a report with staff who treated her and June with condescension and no compassion, waiting for a loaner powerchair to become available.

“We were treated so disrespectfully,” said June, an immigrant from Jamaica and a leader with SEIU 2015, the union for homecare workers. “We had to fight to get a glass of water after sitting there for hours. I kept thinking that they would never treat us this way if we were white.”

Even worse, the temporary wheelchair that Engracia was forced to sit in for four hours at the airport hurt her—one armrest was broken, and the chair seat was too small to fit the cushion she requires to support her body. “I woke up the next day in excruciating pain in my legs and ribs. My jaw also throbbed from clenching my teeth for so long,” she said.

Unfortunately, Engracia’s experience is common among wheelchair users who are not able to board their flights using their chairs, which are required to be stored with other cargo during flight. U.S. based airlines damage nearly 30 wheelchairs per day.

Until she receives a new wheelchair, Engracia will not be able to leave her home because the loaned wheelchair only provides limited mobility. Engracia is now fighting for United to cover the costs to replace her power chair and to issue a public apology for the physical and emotional damage they caused.

“United should publicly apologize for how they treated us,” said Engracia. “All airlines need to do better by hiring disabled people on their staff, training their staff to know how to respectfully interface with disabled customers, and to handle their critical equipment,” she said.

This week marks the 30 year anniversary of when Engracia became disabled due to a spinal cord injury and left leg amputation. “United Airlines just redisabled me,” she said. “Nobody should have to live in fear that they will lose their independence due to an airplane ride, but for people with disabilities that’s exactly what we have to go through every time we step on a plane.”

So how can you help?

First, sign this petition to demand that United pay to replace Engracia’s wheelchair and publicly apologize for the pain they have caused.

We’ve had enough. Tell United Airlines to respect people with disabilities and the critical equipment that supports dignity and agency.