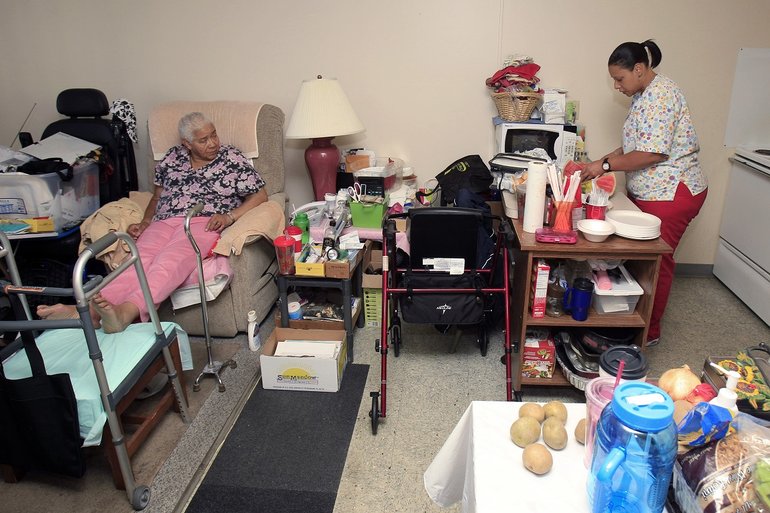 This article originally appeared in Governing on June 17, 2019. Read the original there.

The Trump administration’s immigration policies won’t just impact immigrants. It turns out, they could make it harder for people to avoid spending the later years of their lives in nursing homes and assisted living facilities.

According to a study published this month in Health Affairs, immigrants make up nearly a quarter of the long-term care workforce, which struggles to retain labor.

Immigrants comprise 23.5 percent of the long-term care workforce, including family caregivers. Almost 12 percent of that workforce are naturalized citizens, 8 percent are legal noncitizens and 3.7 percent are undocumented immigrants. The numbers are similar for “direct care,” a subset of long-term care that provides services to people in their homes.

“What this study shows is we need that low-skilled workforce, particularly in the industries that take care of our family. Any policies that scare that workforce are going to have large ramifications in caring for our aging population,” says Leah Zallman, the director of research at the Institute for Community Health and lead author of the study. “What we see are immigrants filling in the gaps in the low-skilled labor market.”

The Trump administration’s immigration policies could make it harder to find workers for these jobs.

For example, the new “public charge” rule — proposed last year and not yet finalized — would penalize legal immigrants for using government aid even when they qualify for it. If someone has used any of a wide range of public benefits, including Medicaid, food stamps and housing subsidies, they could be denied green cards or permanent residency.

This year, the U.S. Department of Housing and Urban Development submitted a rule to the Federal Register that would disqualify families from living in public housing or receiving Section 8 housing vouchers if they have an undocumented person living with them. It’s now subject to a 60-day comment period ending in mid-July.

Even though these proposals are not yet in effect, immigration and health experts say they’ve already had a “chilling effect” on immigrants — many of whom are now too afraid to enroll in government programs. What’s more, they say, if immigrants struggle to take care of themselves, that impedes their ability to take care of others.

“We’re talking about [immigrant] families that will go without food and health care because they’re being pushed out of the system. It means they’ll be working without the resources they need,” says Josephine Kalipeni, director of policy and federal affairs at Caring Across Generations, a caregiving advocacy organization. “We’re [already] expecting incredible shortages in the workforce. We already don’t have the workforce we need.”

Turnover in the long-term care sector ranges from 45 to 66 percent, according to PHI, a nonprofit that works to improve long-term care services. And 1 in 4 nursing assistants, along with 1 in 5 home health aides, are actively looking for another job. Low wages, demanding schedules and little opportunity for growth have all been cited as reasons for the high turnover, PHI found.

The long-term care sector’s struggle to fill positions coincides with a growing movement away from institutionalized care like nursing homes and in favor of treating people in their homes. Policies that could harm more than a quarter of that workforce, says Zallman, could make it harder for people to age in place.

“[Elderly patients] often struggle to find the help they need,” she says. “When they can’t get that care, they end up in institutionalized care, which is more expensive and usually not what they want.”