Emigrating From the U.S. May Be the Only Way To Afford Eldercare - Caring Across Generations 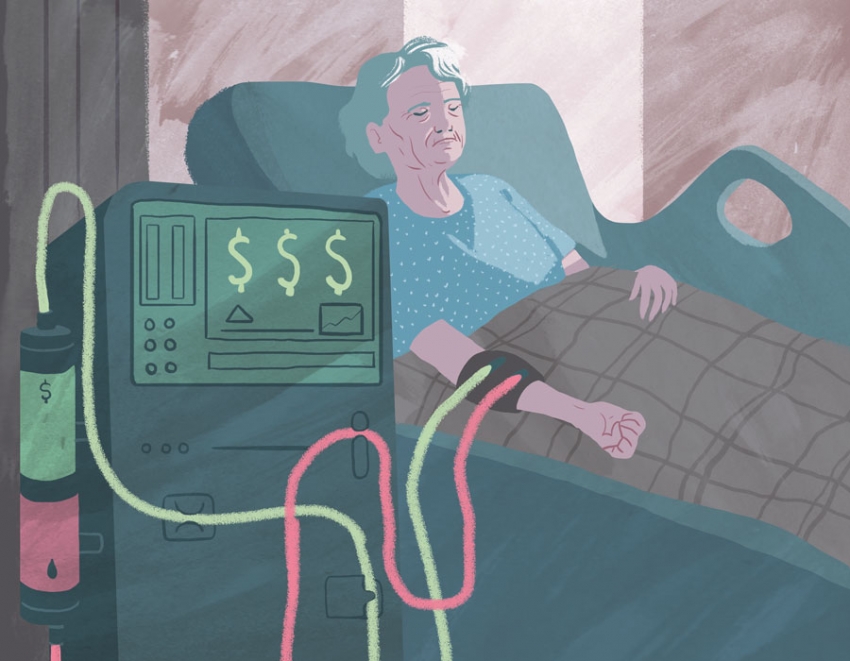 Emigrating From the U.S. May Be the Only Way To Afford Eldercare

This article first appeared in In These Times on January 23, 2019. Read the original there.

For my mother, who moved to the United States from her native Philippines in the 1950s when she was just 25, held a job for four decades, took care of my dying father for three years and then lived independently for five years afterward, the stroke was a cruel and devastating transition into elderly dependent care—and it came with a shockingly high price tag.

Following her stroke, I moved my mother into a senior care facility in Sacramento, where I live. The facility cost $80,400 last year, and the fee will increase by 6.4 percent in 2019.

Later this year, my partner and I plan to marry and move to Cologne, Germany, where he lives, and we agreed to bring my mother with us. So, last September, I visited the Residenz am Dom, a senior care facility in Cologne, and met with Marie-Luise Wrage, a social worker who counsels family members of potential residents.

When it came time to discuss costs, Wrage appeared slightly flustered, concerned that the amounts would be off-putting. First she explained to me that the German healthcare system uniformly classifies stages of disability and that costs are strictly regulated based on a patient’s needs. The monthly fees for my mother to be housed, fed and cared for at the Residenz, she finally revealed, would come to about $3,200—at which point I revealed that my mother pays more than twice that in Sacramento.

We laughed, but joking aside, agreed: Growing old—or falling ill—in the United States is not for the poor.

The national median cost in the United States for a one-bedroom unit in an assisted living community is now $4,000 per month, or $48,000 per year. Alzheimer’s or dementia care increases that cost by an additional $1,200 per month. Seniors must also often plan for out-of-pocket expenses, in some cases up to $2,000 in copays, coinsurance and prescription drugs, as well as amenities not provided by care facilities, such as toiletries and nonprescription medicines.

Why the disparity between Germany and the United States? Benjamin Veghte, research director at the advocacy group Caring Across Generations (CAG)—who, like me, lived for 15 years in Germany—explains, “There is no organized system for eldercare in the United States, while Germany has a social insurance program. Also, healthcare in the United States is mostly private providers, and since individuals have no leverage to bargain, costs are higher. In Germany, there is a budget for healthcare, whereby the government negotiates prices with providers. Everyone pays in, creating a whole nation of clients and a viable business model.”

He notes, too, that, unlike the United States, other industrialized countries like Germany designed their healthcare systems a century ago—long before there were vested interests represented by healthcare lobbyists with license to influence policy.

“The United States is unique,” he says. “Healthcare here is nearly 20 percent of the economy and the industry wants to protect its income.”

The benefits of the German system were familiar to me. In 2012, when I was living in Germany, I was diagnosed with cancer. Having never dealt with serious illness, my first thought was, “How am I going to work during treatments so I can afford this?” As an American, the words “medical bankruptcy” kept parading across my mind. I’ve given to several GoFundMe campaigns of friends in the United States who found themselves unable to work because of treatments like chemotherapy and radiation that physically exhausted them, and they’d meanwhile used up all of their allotted vacation days and sick leave.

I, on the other hand, never saw a single invoice for anything related to my care in Germany. Whether one is privately or publicly insured, healthcare there is comprehensive and reliable. I was allowed a year off of work with full pay and also a six-week stay at a healthcare resort, none of which is unusual by German standards. I can still remember how perplexed my German colleagues were at my initial anxiety surrounding my insurance and whether my job would be in jeopardy if I couldn’t work. For them, it was a given that I would be treated so well—as if I were, you know, recovering from a life-threatening disease.

All of this was covered by my public insurance through my employer (a nonprofit cancer research society), for which I paid twice as much in monthly premiums as I pay now at my job in California. Political conservatives might well balk at this. I am grateful for the care and time off to recover.

But that’s not the only way that Germany’s system is more socialized than the United States’. While no public option for healthcare coverage exists here, the vast majority of German residents are insured by public “sickness funds,” or Krankenkassen. In Germany, about half the hospitals are public and about a third are private but not-for-profit, with the rest private for-profit. There are both public and private insurers, but all insurers are required by law to cover everyone and to cover a standard set of benefits, which includes most procedures and medications. Every German can access these funds because their insurance rates are adjusted based on their income. Meanwhile, millions of Americans fall into what’s called the “Medicaid gap,” earning too much to qualify for Medicaid but too little to qualify for the Affordable Care Act’s subsidies.

The difference in quality of care is notable as well. In Sacramento, my mother has to share a room and is unhappily confined in her facility’s memory care “neighborhood,” which is essentially a sequestered wing of the building; at the Residenz, however, she would have her own room and more freedom to roam the premises, which are built around a corridor and courtyard, with shops and an adjacent hotel.

In taking over my parents’ estate, I saw how carefully they had planned for their retirement and healthcare. Both were penniless when they immigrated to the United States (my father fled Hungary in 1956), but they saved diligently and paid off their mortgage and also my college education. Yet, despite all this planning, my mother’s safety net could break with just one emergency; if she were to have another stroke and need around-the-clock care, her costs in Sacramento could balloon to $120,000 a year.

All of which has left me absolutely baffled at the Republican Party’s subterfuge against healthcare reform. We need a transparent, fair and regulated system. A majority of Americans already support one solution: single-payer healthcare, a system in which a public entity (i.e., the government) would cover the costs of all medically necessary services, including long-term care. Publicly funded insurance has a proven track record: According to the 2015 Global Age Watch Index, the top five countries for elderly wellness (Switzerland, Norway, Sweden, Germany and Canada) all have publicly funded insurance for long-term care.

Thankfully, groups such as Caring Across Generations—a national campaign to improve eldercare in the United States—are pushing for changes to our eldercare system. CAG calls for the creation of a federal “compulsory long-term care insurance program,” paid family leave to ease the burden on those caring for elderly family members and an initiative to “incentivize and recruit family caregivers into the paid workforce.” These recommendations would fix gaps in current eldercare coverage and reduce the costs of caring for an aging relative.

For now, however, when I think of my mother’s expensive daily care, my own past illness and the medical challenges that my old age could bring, it’s sobering—and disappointing—to acknowledge that America has failed to offer us a more secure life.