America’s Eldercare System Is a Tinderbox - Caring Across Generations 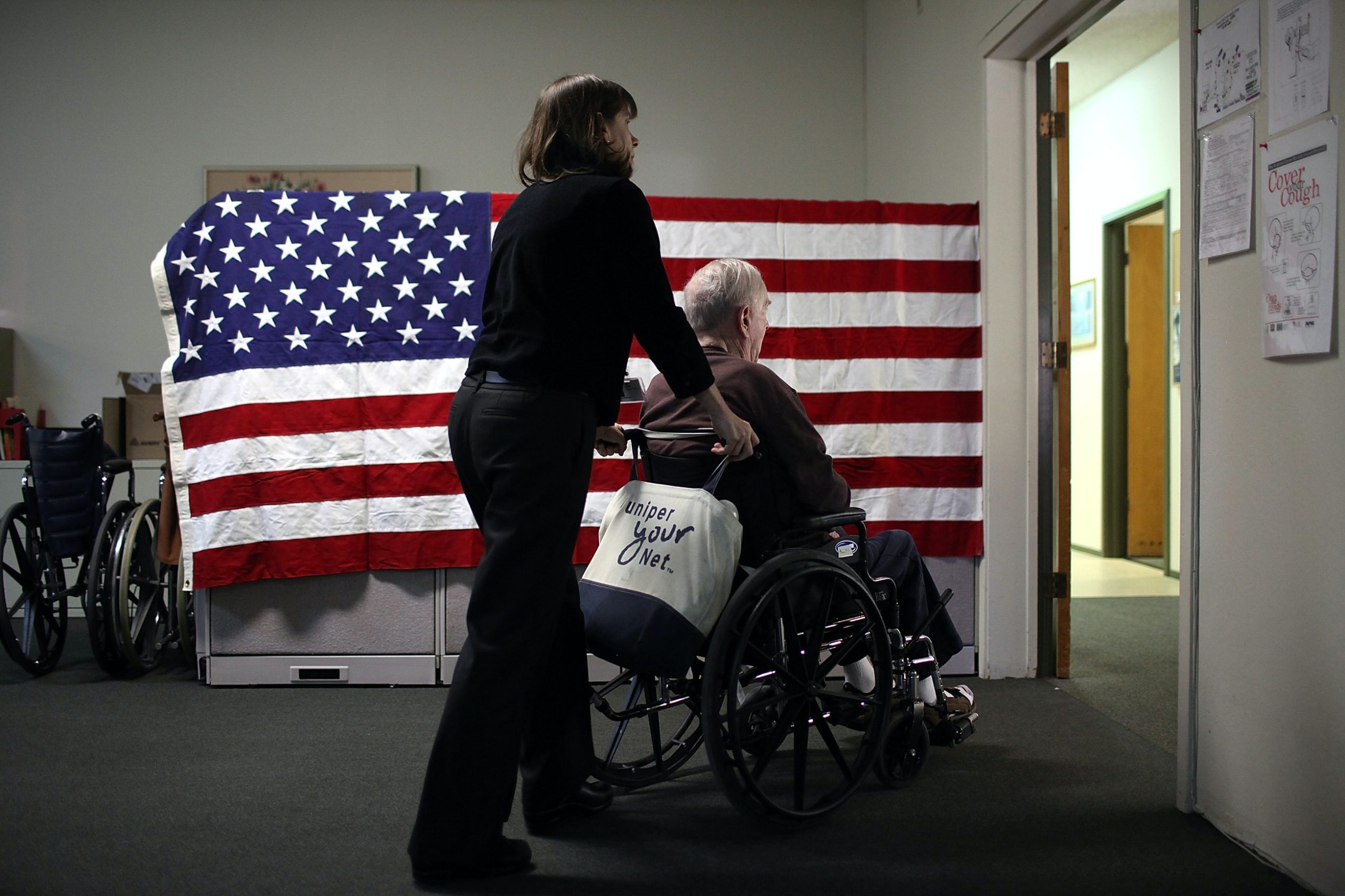 America’s Eldercare System Is a Tinderbox

This article first appeared in The New Republic on March 26, 2020. Read the original there.

One of the earliest signs that the coronavirus was about to overtake the United States was the February outbreak at a nursing home facility outside of Seattle. At the Life Care Center in Kirkland, Washington, the number of confirmed coronavirus cases climbed as family members anxiously waited at the windows, prohibited from going inside. By the third week of March, after the coronavirus was officially designated a pandemic by the World Health Organization, two-thirds of the facility’s residents and 47 of its workers had contracted it, and 35 people in total had died.

Because adults over 65 appear to be particularly vulnerable—and because their family members, paid caregivers, and other people who help care for them may now be required to distance from them—senior citizens have an immediate threat to contend with as the pandemic spreads. But even prior to this public health emergency, the U.S. was on the brink of an eldercare crisis sparked by an “elder boom”—that is, the rapid increase in the population of elderly adults as members of the Baby Boom generation begin collectively to reach an age where they may need assistance with daily tasks. As The Washington Post reported last year, “Across the country, the number of seniors will grow by more than 40 million, approximately doubling between 2015 and 2050, while the population older than 85 will come close to tripling.”

The problem isn’t, strictly speaking, the aging population itself but rather that the eldercare system as it stands won’t be able to match the surge, and, as pandemic conditions reveal, is already cracking. Many seniors and their families are reluctant to use nursing homes, in part because such facilities have a grim reputation in the U.S., but also for the simple reason that they’re prohibitively expensive: In 2020, the average cost of a private room at a nursing home was $8,365 per month. Other eldercare options in the U.S.—which include adult day cares, paid in-home care, and unpaid care from family members or friends—together make up a fragmented and unreliable system.

It also increasingly relies on a low-wage home-care workforce that turns over quickly and burns out workers. While home care is one of the fastest-growing occupations and now employs around two million workers, that still won’t be enough to keep pace with the number of seniors who will require some form of in-home assistance over the next two decades or so. According to one estimate by Paul Osterman, co-director of the MIT Sloan Institute for Work and Employment Research and the author of Who Will Care for Us?, by 2040 there could be a shortage of at least 350,000 paid caregivers. “We know there aren’t enough workers to meet the demand, and we know we can’t keep workers because the jobs are so low quality,” said Josephine Kalipeni, the director of policy partnerships for Caring Across Generations, which works to reform the country’s long-term care system through federal and state policy. “They’re not well-paying jobs, they’re not well-trained jobs, they don’t have many benefits. We know that a ton of care workers are living on the margins of poverty.”

As with many other low-wage occupations, home-care workers are disproportionately black and immigrant women—with many of the latter undocumented—and receive little in the way of training or employer benefits like health care or paid time off. They’re also excluded from a number of federal labor protections. According to PHI, a research organization focused on eldercare, today the median annual income of home-care workers is $15,100, or about $11 an hour, and 15 percent live below the federal poverty line. As the coronavirus continues to spread, many home-care workers who were already struggling to make ends meet are now confronted with the choice between following social-distancing orders and not getting paid or showing up to work and potentially putting themselves or their clients at risk. “Home-care workers are in a really challenging position right now,” Julie Kashen, a policy expert at the National Domestic Workers Alliance, told The New Republic. “For them, going to work means caring for somebody who is potentially vulnerable to the coronavirus. These workers know they’re essential for that person’s care, but they’re also worried about their own health, they’re worried about the health of the person they’re working with and what they might expose them to, and they’re worried about coming home to their own families.”

Even after the pandemic subsides, the fundamental conditions that precipitated those impossible choices—low wages, and, in many cases, a lack of basic workplace protections like paid leave or collective bargaining rights—will remain the same without a significant overhaul of the care system. But because the inadequacy of the system is perhaps more visible than it’s been in a long time, this might also be a chance to start rethinking eldercare in the U.S. before the next disaster hits. “The crisis brings into sharp relief both how important these workers are, but also the fact that we don’t treat them very well,” Paul Osterman told me.

According to Osterman, creating a more sustainable eldercare system could involve expanding the scope of what home-care workers are allowed to do, which Osterman says would simultaneously create an incentive to raise workers’ wages but also lower clients’ health care costs over the long term. “Home-care aides aren’t respected by the system,” he said, and one consequence of that is that they’re prohibited in many states from performing basic functions such as administering packaged medicines or aren’t trained to help clients manage chronic conditions. (As it happens, there’s also no standardized formal training, as Madison Pauly recently wrote in Mother Jones, around infection control for outbreaks like the coronavirus.) “If they were trained to do more—for example, in helping people with chronic conditions, that would save the system money because people with those conditions would be less likely to need additional medical care or be admitted to hospitals or nursing homes,” said Osterman. “And the money that would be saved could be directed in part toward these aides’ compensation.”

Then there are broad social insurance programs like Universal Family Care, a proposal released last year by Caring Across Generations that’s meant to serve as a blueprint of policy options that states can adopt. This type of social insurance, Kalipeni said, isn’t limited to eldercare but is also intended to cover childcare, paid family and medical leave, and long-term home and community-based care. “We need an integrated approach because no one experiences needs in isolation: We might need help right after an injury, or over the course of our lives, to help a disabled family member thrive,” Ai-Jen Poo and Benjamin W. Veghte, two authors of the plan, wrote in The New York Times.

Though so much of the country—now ordered to undertake social distancing and stay out of the workplace—very much feels as though it’s at a standstill, the bleak reality is that many more people, particularly the elderly, will need care in the coming weeks from a system wholly unprepared to deliver it. And that same system that’s visibly under immense strain now won’t be tenable in the coming decades when the senior population spikes. As Kalipeni put it, “What’s becoming very clear in this moment is that care is a collective responsibility.”